This full melt bubble hash was made using organically grown fresh frozen flowers and contains only 73-90u trichomes from the first wash. Tundra is a cultivar bred from Passion #1 and Russian ruderalis, known for its’ spicy and sour flavour, with giant white sticky trichomes. Contains: 1 gram

This partial melt bubble hash was made using organically grown fresh frozen flowers and contains only 73-90u trichomes from the first wash. This cultivar is a cross of blueberry with classic Romulan to make an uplifting hybrid.  This hash has 6% total terpenes with myrcene, β-Caryophyllene, and α-pinene being the most abundant.

I got some of this in rosin form when concentrates first became legal. Some of the most potent rosin I had ever smoked. I was about to drive three hours to get this hash in Saskatchewan but then it appeared here. This isn’t melty enough to smoke on the nail for me. To be expected as partial melt. Tastes unbelievable like sweet purple grapes 🍇 and blueberries 🫐, in the Dynavap. I find the effects potent indica like a Purple Kush. I’m a big fan of what these guys do, great sun grown hash. Hope we see their Rosins too.

This is my first time trying bubble hash ever. So as per the bubbling I am not sure as I mixed this in with my green. It certainly added addition Terps and taste to my roll. All I can say is it smelt great , looked great burned smooth and tasty and gave a nice added effect. Seems of top quality. I am excited to now try more bubble hash ! 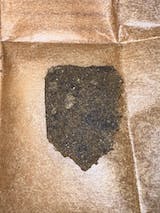