This hash is unique in many ways with its vibrant yellow hue, high CBG content and rare terpene profile. Starting with organically grown flowers we isolate only 73-90u trichome heads from the first wash to deliver the finest fraction of this cultivar. Contains: 1 gram

This hash is unique in many ways with its vibrant yellow hue, high CBG content and rare terpene profile. Starting with organically grown flowers we isolate only 73-90u trichome heads from the first wash to deliver the finest fraction of this cultivar. The flavour is best revealed at low temperature; an initial blast of citrus leaves a lingering taste of tropical fruit. This hash stays sticky with 4.5% total terpenes, dominated by Limonene, β-Caryophyllene , Ocimene, Caryophyllene oxide and Cedrol, a rare combination. From its appearance to its flavour, this hash is guaranteed out of this world!

This stuff is something special. It melts so clean on the nail it’s hard to believe it’s not shatter. It comes as a hard puck, that hot knife would help a lot with breaking it up. The flavour is intense which is surprising since it has very little nose. The terps are very stable. It tastes like frankincense which I can see turning people off. The effects are quite different also. More of a care free up/calm buzz. Not debilitating in the slightest. If you’re like me and chasing different flavours and experiences from cannabis this is a must try. Curious to see what this would cure like over a few years. Very cool stuff. 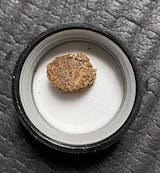