Its undeniably dank aroma smacks you in the face with a pungent funky, creamy, fragrance compounded by a dense scent of jet fuel.

With a name like First Class Funk, one can assume this indica-dominant strain is going to be stinky and strong! Although this popular strain is grown by many cultivators, it was originally created by Compound Genetics from crossing GMO with Jet Fuel Gelato. As any cannabis aficionado knows, these parent strains are both all-Stars, both with a reputation for potency.

Its undeniably dank aroma smacks you in the face with a pungent funky, creamy, fragrance compounded by a dense scent of jet fuel. The funk tastes as funky as it smells with notes of fermented anise and fennel coupled by gassy aftertaste as it rolls of the pallet.

Love herbal dispatch so glad to have you back online.

S
Stoinks (Georgetown, ON)
No as good as anticipated

Good but not as good as you would think for a 30% THC rating.

3 buds in my 7g bag, 2 buds that are probably 3G’s each, then one smaller 1g nug. Very potent earthy smell in the bag, not hay. Breaking up a bud releases more earth smell and some gas smell. Good moisture level and a bit of stickiness, pics on the site are a very accurate representation of what I see in my bag. Decent taste, smooth enough, a very hard hitter that is definitely punching above its AAA rating. Well done on this one, excellent before bed.

This weed brings me back, NOT in a good way. Reminds me of when I didn't have a good hook-up. Accidentally bought this thinking it was AAAA. Maybe novice smokers will find this good, but I agree some other reviews, AA at best. Worst smelling weed I've bought in over a decade.

Upon opening bag you get the smell of hay and earth. Smells much better once milled, fresh and sticky.
That being said, it does provide a decent high and doesn't taste too bad. I'd compare this more to a AA at best but definitely not bad bud. 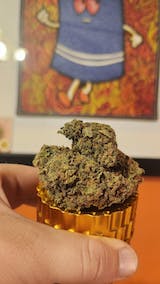 This funk is not junk! Taste is dank, burns perfect, after taste rolls off nicely. Very good smoke, i would buy again!

Looks nothing like the pictures, smells like hay, lowest grade flower ive had in a long time.

Our line of small-batch, craft cannabis is grown by some of the best growers in BC. We've carefully curated this selection of strains to offer a diverse range of experiences and budgets. Here's access to exclusive, small-batch craft cannabis at your fingertips.